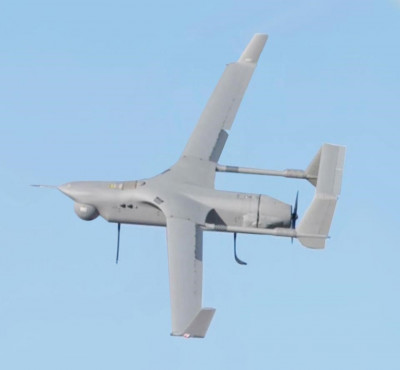 The 135-pound Blackjack is NAVAIR’s small unmanned aircraft system of record, selected for development over competing designs in 2010 and first deployed in combat in 2014. It is used worldwide by Navy and Marine tactical commanders to collect timely reconnaissance and target enemies.

Judging from the wording of Tuesday’s award, the RQ-21 team is performing well, not just in terms of providing tactically useful intelligence, but also in assuring that naval personnel are adequately trained to operate and sustain the aircraft.

Blackjack can collect a diverse array of information and does not require a runway, thanks to its catapult launcher and Skyhook recovery system. Insitu, a wholly owned subsidiary of Boeing, has lengthy experience in developing such technology, since it also builds the ScanEagle small unmanned aircraft system. Boeing contributes to my think tank.

However, something big is happening with Blackjack that belies the prosaic term “drone” often used to label such air vehicles in popular media. The RQ-21 is becoming so capable that it can take the place of much bigger, more expensive unmanned aircraft in military operations spanning entire regions—what the military calls “theaters.”

That’s a particularly timely development for U.S. warfighters, because the joint force has begun to lose some of its pricey unmanned aircraft to hostile fire. On June 20 last year, Iran shot down a $200 million Global Hawk drone with a locally made surface-to-air missile. Only days earlier, a $16 million Reaper drone was downed in Yemen.

Aircraft losses, manned or unmanned, were almost unheard of during the global war on terror. Organizations like the Islamic State lack air defenses. But the focus of U.S. military strategy has now shifted to Russia and China, countries that are equipped with the latest technology for tracking and targeting U.S. aircraft.

So it was no surprise when the Air Force disclosed last month that it wanted to begin retiring both Global Hawk and Reaper.

However, warfighters still need timely reconnaissance to target enemies and minimize U.S. casualties. The challenge is to find survivable platforms for maintaining a presence near hostile forces—or at least, platforms that are sufficiently affordable so that when one or two are lost, military capabilities aren’t crippled.

This is the need that an extended-range version of Blackjack meets. It remains a small fraction of the size (and radar cross-section) of bigger unmanned systems, but it can cover much larger areas than in the past for extended periods of time. For example, a live-fly evaluation last May demonstrated its ability to stay aloft for 17 hours, during most of which time it could loiter near items of interest hundreds of miles from its home base.

The vehicle only used about two pounds of fuel per hour. Remember, it weighs less than a typical Marine. And because it is so small, enemies are less likely to see it even when it is near, enabling the collection of very precise intelligence. If it nonetheless is lost to hostile fire, it can be replaced for roughly 1% of what a Global Hawk cost—and less than 10% of the price-tag for a Reaper.

The key enabler here, though, isn’t greater fuel efficiency or an airframe that minimizes drag. What turns extended-range Blackjack into a theater system is greatly enhanced communications afforded by lightweight equipment. RQ-21 provides satellite links so that remote pilots and users of its recon can communicate with the aircraft.

In the past, the satellite equipment by itself weighed more than the entire payload capacity of Blackjack. But recent advances have slashed the weight of both the comms package and the various sensors the aircraft carries, so that it all can be accommodated in a combined payload of less than 40 pounds.

That includes the ability to generate full-motion video day or night, electro-optical and infrared imagery, and laser range-finding of targets that is available instantly to warfighters hundreds of miles away.

So a small unmanned aircraft system that once was limited to 50 or 60 miles of range due to the constraints imposed by line-of-sight communications can now deliver intelligence from hundreds or thousands of miles away, thanks to a satellite uplink. And it can be operated by a pilot on the ground thousands of miles distant from where the vehicle is flying.

The transformation in capabilities is stunning. Previously, a tactical unmanned aircraft system, relying on line-of-sight links, could cover an area not much larger than that of metropolitan Seoul, South Korea. With extended-range Blackjack, all of South Korea or North Korea could be covered, and also some parts of China, from the same point of origin.

What this means in practical terms for warfighters is that a single Blackjack system consisting of five air vehicles, two ground control centers, and the associated launch/recovery equipment could cover much of Eastern Europe, or the Persian Gulf, or any other region of interest—without requiring a runway or the logistics tail associated with larger aircraft.

Thus, what once was regarded as a purely tactical system is potentially transformed into a strategic tool. The system is so lightweight that it can be transported on a small truck, such as the Army/Marine Joint Light Tactical Vehicle—or on any ship in the U.S. fleet, or on any airlifter in the joint inventory.

The small footprint and agility of Blackjack is complemented by a modular design that facilities the introduction of new on-board sensors and processors. All signals are encrypted, so there is little danger of interception even when they utilize commercial SATCOMS and teleports.

A 2018 study by the Pentagon’s Office of the Under Secretary for Intelligence acknowledged that the functionality of small unmanned aircraft was growing to a point where systems like extended-range Blackjack could substitute for more expensive drones on many theater missions.

What’s amazing is that Insitu was able to integrate all the pieces in only a few months, and demonstrate the performance gain to a diverse audience of prospective military users quickly. The next episode in the Blackjack story looks likely to save the joint force a lot of money, not to mention lives.