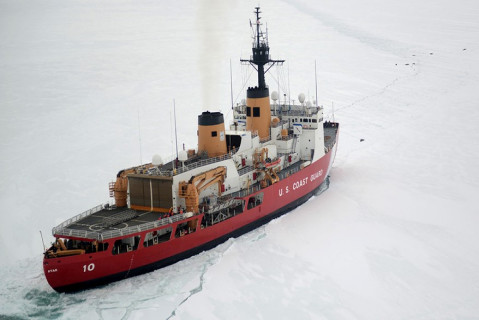 Speaking before scores of Coastguardsmen and dignitaries at the Port of Los Angeles-Long Beach, Schultz highlighted the Trump administration’s fiscal year 2020 budget request for the Coast Guard, which has a topline of $11.34 billion. That and the 2019 enacted budget puts the Coast Guard on a path to readiness, he said.

“These budgets help deliver a ready, relevant and responsive force poised to meet the needs of the nation,” he said.

However, the service will need steady increases of at least five percent a year to continue its modernization efforts and to update its facilities to accommodate new ships such as the National Security Cutter, Offshore Patrol Cutter along with new inland waterway boats and polar icebreakers, he said.

The 2020 request includes $35 million to continue work designing a new fleet of Polar Security Cutters. The Coast Guard is planning to acquire six icebreakers to replace its two remaining legacy ships. Cost estimates for one such vessel have been as high as $1 billion. While the proposed budget does not include additional funds for long lead-time materials, the 2019 budget included $675 million for advanced materials and the first ships.

Of the six planned icebreakers, Schultz said three will be the larger Polar Security Cutters. “Today, I am proud to say, we will award the construction contract this spring for the first one,” he said.

The budget request also includes $15 million to maintain the 43-year-old USCGC Polar Star until the new icebreakers are delivered. Schultz lauded the tenacity of the Polar Star’s crew which recently completed a mission to Antarctica even though a major part of its structure broke while sailing there and the ship took on water.

“Hundreds of miles from the nearest safe port, a joint Coast Guard and Navy dive team braved the icy ocean to apply a patch that slowed the flooding,” he said. The age of the ship is not lost on Congress, which provided the funding in the last fiscal year to start the replacement program, he said.

The budget request includes a total of $792 million for new vessels. More than half of the vessel budget, $457 million, would go to procuring the third Offshore Patrol Cutter and purchasing long-lead time materials for the fifth and sixth cutters, a budget document said. The first of the new platforms, which are being built by Eastern Shipbuilding Group, are expected to be delivered in 2021. The program of record calls for 25 hulls, which will eventually comprise 70 percent of the Coast Guard’s offshore presence, Schultz noted.

“Today, the OPCs and the Polar Security Cutters are our top investment priorities,” he said.

Schultz took the opportunity to announce that the first two Offshore Patrol Cutters would be stationed at the Los Angeles-Long Beach port. The first of the new ships would be designated the “Argus.” More immediately, four new Fast Response Cutters are being sent to the port.

The budget request is asking for $9 million for small unmanned aerial vehicles, up $3 million from 2019. The Coast Guard has been deploying Boeing-Insitu ScanEagles off its National Security Cutters to assist with drug interdiction missions in the Western Pacific.

“ScanEagle is truly a game-changer for our crews,” Schultz said. It will be his goal to accelerate their deployment from two to four systems per year and to have them on every NSC before his tenure as commandant ends. In addition, he will push for all Offshore Patrol Cutters to come outfitted with ScanEagles as they leave the shipyards.

Another $140 million in the 2020 budget request would go to acquiring two Fast Response Cutters, and $60 million for post-delivery items for the National Security Cutters. The Coast Guard originally planned for eight NSCs, but Congress added funds in the 2018 budget for three more of the vessels.

The new cutters coming online will allow the sea service to retire one of its legacy high-endurance cutters and three 110-foot patrol boats. That will result in $12 million in savings, if approved, the document states.

Also in the budget is another $2.5 million to fund the development of the Waterways Commerce Cutter, a ship designed to patrol lakes and rivers.

As for aircraft, the Coast Guard is asking for $200 million, most of it going to upgrades and modernization of existing fixed-wing and rotary-wing search-and-rescue and interdiction aircraft such as the MH-65 and HC-27J.

The service is also asking for $15 million in communications upgrades to better communicate with Defense Department partners and to boost its connectivity in high latitudes, the budget document said.

Over the past eight years, the operations and sustainment accounts flatlined, eroding the Coast Guard’s purchasing power by five percent, Schultz said. “Imagine bringing home 10 percent less of your paycheck to cover essential bills. In a modestly funded organization like the Coast Guard, this has resulted in deferred maintenance, a strained and undersized workforce and antiquated information systems,” he said.

There is a shore infrastructure backlog of projects totaling $1.7 billion, he noted. That doesn’t include the infrastructure needed to accommodate new ships such as the Offshore Patrol Cutter, Waterways Commerce Cutter and Polar Security Cutters, he said.

“Looking to the future, the key is stable and predictable funding for our acquisition programs in able to continue to meet delivery milestones,” he said.