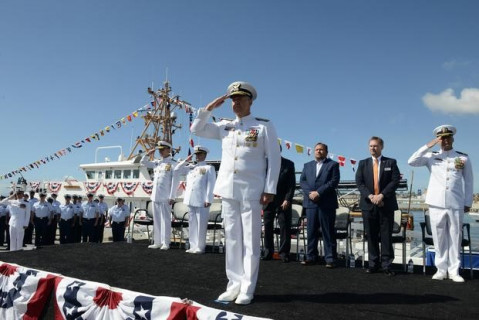 Fresh from a trip to Coast Guard Sector Los Angeles-Long Beach for his first State of the Coast Guard address and to speak at the commissioning of the service's newest ship, the Fast Response Cutter Terrell Horne, Adm. Karl Schultz takes his case for the service's proposed $11.3 billion fiscal 2020 budget to Congress on Tuesday, starting with the House Appropriations Homeland Security subcommittee.

Schultz said Friday that the budget, which includes $9.32 billion in discretionary funding, is needed to recapitalize the cutter force, build new infrastructure, accelerate the deployment of unmanned aerial systems on the National Security Cutters (NSC); upgrade aircraft; and chip away at a $1.7 billion shore infrastructure sustainment backlog.

"Over the last eight years, our operations and support funding has essentially been flatlined, eroding our service's purchasing power by 10 percent," Schultz said. "Imagine bringing home 10 percent less in your paycheck to cover essential bills."

During his speech, Schultz said that, without the resources it needs to recapitalize and sustain the force, the Coast Guard will reach a "tipping point" regarding readiness. "Coast Guard men and women are doing more, in increasingly complex and dangerous environments with aging platforms and infrastructure," he said.

He added, however, that he is guardedly optimistic that the service will get full funding and perhaps receive more, as it has in the past two years.

"I feel well supported by [Department of Homeland Security Secretary Kirstjen Nielsen] and the administration on the budget. ... And I'm hopeful that the Congress will continue to think that additional investment in the Coast Guard is good for the nation," Schultz said.

The fiscal 2020 budget request is lower than the Coast Guard's 2019 appropriation of more than $12 billion and 8 percent lower than its fiscal 2018 enacted budget.

© Copyright 2019 Military.com. All rights reserved. This material may not be published, broadcast, rewritten or redistributed.