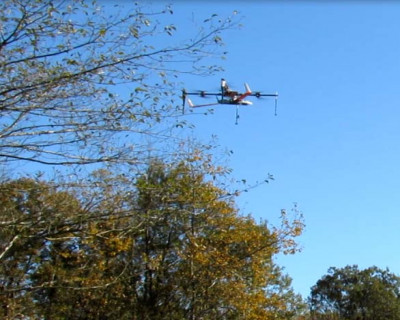 “We selected the test site specifically for its challenging topography, with obstacles in all directions” stated Hood Tech Test Engineer, Cory Roeseler, “That clearing is too small for traditional fixed-wing UAV launch and recovery methods.  It is nicely surrounded by tall trees.  VTOL was needed, and we were pleased with the way FLARES performed.  We launched and recovered a clean aircraft, fully-capable of its original design intent, not a hideous contraption overloaded with VTOL claptrap.”
FLARES released the fixed wing aircraft into wing borne flight high above the tree-tops.  Zero modifications were imposed upon the fixed wing aircraft for this vertical launch, since the FLARES system engages the aircraft with grippers at the wing roots.
Capture of the aircraft was accomplished via the
“skyhook method,” also above the tree tops.  From that capture height, the aircraft was lowered to the ground undamaged.
The entire FLARES system was transported to the site as a partial load of a ½-ton pickup truck and setup by a crew of two in under an hour.

Video of the forest clearing demonstration is available here: https://vimeo.com/369853337