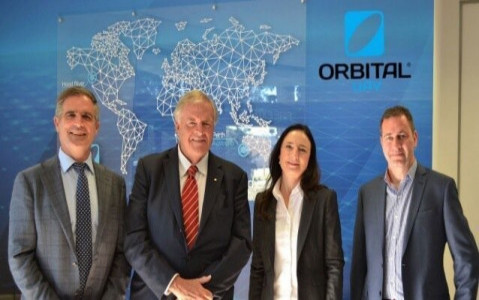 Governor Beazley – who this month celebrates his first anniversary in the role – has identified the defence industry, defence technologies and the defence of Western Australia as one of his key areas of strategic interest during his tenure as Governor of WA.

“I was delighted to join Orbital UAV and gain a better understanding of the exciting work they are doing in the global UAV sector from here in Perth,” said Governor Beazley.

“I have been aware of the Company for many years and it is a testament to their technical capabilities and an international reputation that they are today supplying some of the world’s leading tactical UAV manufacturers with their unique propulsion systems and associated technologies,” he said.

Orbital UAV is currently focused on supplying key customer Insitu Inc. – a wholly owned subsidiary of The Boeing Company – with multiple propulsion systems and services that will be applied across Insitu’s entire range of unmanned aircraft system (UAS) platforms.

his work forms part of a five-year Long Term Agreement signed in 2018 and worth between A$120-A$350 million.

“During his distinguished political career, Governor Beazley has had firsthand experience of the defence sector and its significance in Australia,” said Todd Alder, Managing Director and CEO of Orbital UAV.

“As state and federal governments continue to drive the strategic importance of increasing Australia’s defence capabilities, we were delighted to be able to demonstrate to the Governor Orbital UAV’s unique offering and highlight the role we are playing in the rapidly growing and evolving UAV market,” he said.

The Australian Defence Force continues to develop its UAS capabilities with initiatives such as the Navy’s commissioning of the 822X Squadron to operate UAS platforms, and the recent launch of the Boeing Airpower Teaming System – designed for global defence customers by Boeing Australia.

“As an Australian-based SME operating on a global level, we are excited by the significant opportunities in this area of the defence sector and we look forward to continuing to support the push to develop Australia’s defence capabilities,” said Mr Alder.