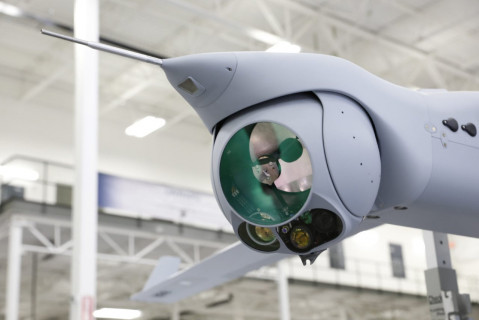 Called the Alticam-14, Insitu Director of Defense Programs Keith Hirschman said Tuesday at the Association of the U.S. Army's annual convention in Washington, D.C., that the enhanced intelligence, surveillance and reconnaissance (ISR) turret will be available for the Integrator, Integrator extended range and upcoming RQ-21A Blackjack members of the Boeing-owned company's UAS family.

No exact resolution was available, but Hirschman said that the Alticam-14 is better than a 9 on the national imagery interpretability rating scale (NIIRS). The improved resolution enables the ability to identify the contents of video footage.

“What the Alticam-14 also does now is give the ability to telescope in and out: to zero in, to identify [a target] and come back out to a bigger picture,” he said. “Compare that to the current state of the art, you flip to magnified view” and lose the frame of reference provided by zooming in and out.

The camera also allows the operator to monitor three video streams at once, simultaneously viewing electro-optical, infrared and short-wave infrared feeds. The fidelity and breadth of information the Alticam gathers will also be an enabler for artificial intelligence (AI) technology that sorts through such data, said Hirschman. Insitu is working with groups such as the  Defense Advanced Research Projects Agency (DARPA) to identify good options for that.

An optional upgrade for the Alticam-14 is a new laser designator that Insitu is developing. The company is ground testing it with Boeing Apaches and plans to move to flight testing as a potential supplement to Apache-ScanEagle manned-unmanned teaming, especially in the Pacific theatre. The laser designator-equipped Integrator could extend the effective range of an Apache without putting pilots in harm’s way.

“Keep (the Apache) at range, fly the UAS forward to snoop around and identify targets and pump that video back into the Apache helicopter, onto the screen that Apache pilots use, so they can laser designate their own targets” for asymmetric Hellfire missile attacks, Hirschman said.

In anticipation of future uses, Hirschman said the laser designator would be compliant with STANAG 3733 (the NATO standard on “laser pulse repetition frequencies used for target designation and weapon guidance”). Like the rest of the Alticam-14 system, the laser designator will be compliant with the whole Integrator line: base, extended range and the RQ-21A Blackjack variant.

The Alticam-14 is currently in contractor testing, and government testing will follow shortly thereafter.

For more information, check out this article by AIAA.