Major Advantages to Platform Thanks to its Small Dimensions 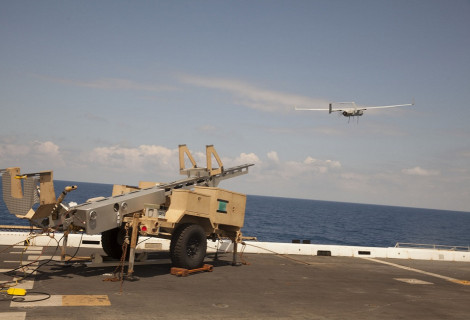 The extended-range unmanned air vehicle, called the Integrator ER, was unveiled in September 2018, as a theater-range platform that is acoustically and visually undetectable at tactical altitudes.

It is used worldwide by Navy and Marine tactical commanders to collect timely reconnaissance and target enemies. Built by Boeing’s subsidiary Insitu, the aircraft can collect a diverse array of information and does not require a runway, thanks to its catapult launcher and Skyhook recovery system.

According to forbes.com, the RQ-21 is becoming so capable that it can take the place of much bigger, more expensive unmanned aircraft in military operations spanning entire regions.

The RQ-21 team is performing well, not just in terms of providing tactically useful intelligence, but also in assuring that naval personnel is adequately trained to operate and sustain the aircraft.

The extended-range version of Blackjack meets the current challenge of the US Air Force – finding survivable platforms for maintaining a presence near hostile forces — or at least, platforms that are sufficiently affordable so that when one or two are lost, military capabilities aren’t crippled.

The extended version remains a small fraction of the size of bigger unmanned systems, but it can cover much larger areas than in the past for extended periods of time.

For example, a live-fly evaluation last May demonstrated its ability to stay aloft for 17 hours, during most of which time it could loiter near items of interest hundreds of miles from its home base. The vehicle only used about two pounds of fuel per hour. And because it is so small, enemies are less likely to see it even when it is near, enabling the collection of very precise intelligence. If it nonetheless is lost to hostile fire, it can be replaced for roughly 1% of what a Global Hawk cost—and less than 10% of the price-tag for a Reaper.

However, what turns extended-range Blackjack into a theater system is greatly enhanced communications afforded by lightweight equipment. RQ-21 provides satellite links so that remote pilots and users of its recon can communicate with the aircraft.

The small unmanned aircraft system that once was limited to 50 or 60 miles of range due to the constraints imposed by line-of-sight communications can now deliver intelligence from hundreds or thousands of miles away, thanks to a satellite uplink. And it can be operated by a pilot on the ground thousands of miles distant from where the vehicle is flying.