Navy moving ahead with UAS 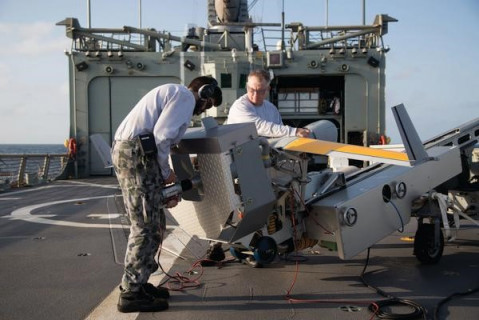 Changes in the structure of Project Sea 129 Phase 5 make it increasingly likely that a common tactical unmanned aircraft system (UAS) will be selected to operate both from the upcoming Arafura offshore patrol vessels (OPVs) and the Hunter-class future frigates.

Phase 5 was originally divided into two stages – Stage 1 for a UAS to be deployed on the 12 OPVs from 2021 onwards, and Stage 2 for a second UAS type to equip the nine Hunter-class frigates, the first which will enter service in the late 2020s.

“Given that we’ve chosen both the OPV and the Future Frigate, dividing the phase into two stages made no sense because what we buy for an OPV should be able to go on a MFU (major fleet unit) and vice-versa,” Commodore David Mann, Director Surface Combatants and Aviation in CASG explained to ADM. “Basically we’re putting those two stages together and just calling it Sea 129 Phase 5.”

Although an opportunity might exist for different systems on larger vessels such as the Canberra-class Landing Helicopter Docks (LHDs) and the 16,190-tonne Land Ship Dock HMAS Choules, the air vehicles were really required just to deliver a payload capacity in a particular area.

“Whether that might be electro-optical, infrared, comms relay, radars or electronic warfare packages, it’s about getting that package in the right place to create the effect, not so much about what the vehicle might be,” CDRE Mann stated.

First Pass approval was expected early next year, followed by a Request for Proposal (RfP). After responses had been assessed, a restricted, classified Request for Tender (RfT) would be issued a year later, from which a Platform Systems Integrator (PSI) would be selected to take charge of the entire program. Initial Operating Capability (IOC) was planned for the mid-2020s.

Operational concept documents had already been developed and an unclassified version would be placed in due course on AusTender to better prepare industry’s input to the RfP.

While the development of requirements was “pretty solid”, Navy would not be averse to modifying these if appropriate, although industry would need a firm base on which to respond to the RfP.

“In the first instance you’d want to see something that is in service so you can have a degree of confidence the system is low risk to integrate into the ship. But one of the great things about having a PSI will be gaining assurance of future systems.

“This structure will also provide us with some efficiencies on the shore side; any partnering that can deliver a more efficient shore support and help us with our workforce management in the short term will be a bonus. The Helicopter Aircrew Training System (HATS) is an excellent example of where we partner with industry to deliver an effect and I see this as an evolution of that style of partnership.”

Meanwhile trials progress under Navy Minor Project (NMP) 1942, which seeks to imbue the RAN with interim shipborne UAS competencies as a precursor to Sea 129 Phase 5, is positive.

These trials involve the Insitu ScanEagle fixed-wing UAS, and the Schiebel S-100 rotary-wing Camcopter, and both involve an element of tradeoff.

“With a rotary wing we get ease of use on a flight deck but that comes usually with reduced endurance and payload whereas something like the ScanEagle gives us increased endurance but it’s more difficult to launch and recover off a MFU and takes up a lot of space,” Captain Matthew Royals, the RAN’s Director of Aviation said to ADM.

“It also reduces the flexibility and agility of the flight deck team with a manned helicopter if they’re going to do some teaming with a UAS, but those are the tradeoffs you make in the RfT and the responses from industry, so ultimately it’s all about the type of effect you want to deliver.”

Although the Arafura class does have a hangar this was not a problem, since many UAS were containerised and the OPVs could if necessary accommodate several such systems.

The ScanEagle was successfully deployed on HMAS Newcastle in the Middle East in 2017 and included simultaneous operations – ‘manned-unmanned teaming’ – with the ship’s MH-60R Seahawk helicopter.

The systems being trialled in the NMP were not necessarily the systems that would be chosen for Sea 129 Phase 5.

The x in the Squadron’s designation represents its experimental work with ScanEagle and the Schiebel S-100 and will remain until the squadron is established as a contemporary capability.

As of April the unit comprised just 30 personnel but this will grow to a minimum of 110 with the implementation of Sea 129 Phase 5 “and probably half that again if we’re true about the workforce size required," CAPT Royals commented to ADM.

“At the moment the 30 are basically getting up their skills on the air vehicles and operating those in restricted airspace at Nowra and then when they can get to sea they’re out there doing their deck work, at the moment mostly on the multirole aviation training vessel (MATV) Sycamore.

“The rate at which the payload performance improves is quite quick and the technological refresh rate has got to be factored into the project. As well as flying, they’re helping develop all the documentation, the concept of deployment for these vehicles and the payloads as well as getting all the airworthiness side of it established.

“When we go into Sea 129 Phase 5 we’ll have a readily-established UAS airworthiness system and also, ideally, a seaworthiness component for shipboard integration.”

Selecting personnel for a new squadron testing a new resource was a major challenge, hence the early start to ensure the squadron was appropriately manned when the project moved into service, CAPT Royals explained.

Currently Navy required a UAS mission commander to have qualified as aircrew, which involved significant overheads in terms of time and cost for training. Payload operators were mostly drawn from aircraft maintenance personnel, and both these issues were under review.

For unmanned rotary wing operations the RAN initially relied on a single S-100 Camcopter on loan from Schiebel. This was powered by a Diamond piston engine whose aviation gasoline (avgas) fuel was deemed unsuitable for combat vessel evaluations because of its relatively low flashpoint.

To meet the RAN’s requirements Schiebel replaced the Diamond engine with a two-disc Rotron 600, sourced from the UK company Rotron and modified in-house. The Rotron engine accepts JP-5, a kerosene-based fuel with a flash point above 60 degrees Celsius and specified by the RAN for safety reasons.

However, Andrew Watson, general manager Schiebel Pacific, confirmed to ADM in April that two JP-5-powered S-100s delivered to the RAN as lead customer in 2017 had been replaced in late 2018 by two avgas-powered S-100s after failing to meet the RAN’s endurance requirement of six hours with a 20kg payload.

Two S-100s powered by a S-2 heavy fuel engine newly-developed by Schiebel would be delivered to the RAN in late September 2019 to replace the avgas-powered stand-ins and would certainly meet or exceed the Australian requirements, Watson said.

Although the avgas-fuelled S-100s had continued flight trials with the RAN’s 2,935-tonne civilian-crewed MATV Sycamore, the replacement S-100s would move to trials with Anzac-class frigates as soon as they were cleared for warship evaluations, CAPT Royals stated.

The parameters to be established for both the MATV and the Anzac-class include safe take-off, operating and landing limits under various sea states and lighting conditions. UAS handling, storage, and emergency procedures are also put in place during these trials.

During recent trials the ScanEagles were fitted with the EO900 EO/IR camera and the S-100s are fitted with L3 Wescam’s MX-10 multi-sensor, multi-spectral imaging system.

The option remains in the longer-term of a laser target designator to ‘lase’ targets, although there is no intention of arming either air vehicle as part of Sea 129 Phase 5.

The systems being trialled in the NMP were not necessarily the systems that would be chosen for Sea 129 Phase 5 – “what we’re doing is getting as much data as we can to help us chose the right systems, and we’ll probably look at increasing that maritime tactical UAS footprint at sea as a further derisking”, commented CAPT Royals to ADM.

“We have an incredibly close relationship with our allies, particularly the US and UK, and we’ve got a range of liaison officers whom we are working closely with on their unmanned systems. We also have a developing relationship with some of the European navies that are working in this area, such as the Germans for example.

“Unmanned systems is a burgeoning area and it’s changing fairly rapidly; but at the moment the footprint for the embarkation at sea of unmanned systems is not much smaller than that for manned aircraft and that’s where we want to see a bigger change, the capacity to control multiple systems from a single shipborne combat management system.”

Having a common air vehicle across the OPVs and Hunter-class would facilitate the integration of the UAS with the Saab combat management system already equipping the Anzac and Canberra-class ships and destined for the OPVs, the Hunter-class, and the two under-construction support ships based on the Spanish Cantabria class in Supply and Stalwart. It would also create significant efficiencies in training.

“In the longer term we don’t want to have a separate ground control station for the air vehicles, we want to be able to control them internally from our combat management system and have them fully integrated,” CAPT Royals stated.

This article first appeared in the May 2019 edition of ADM.