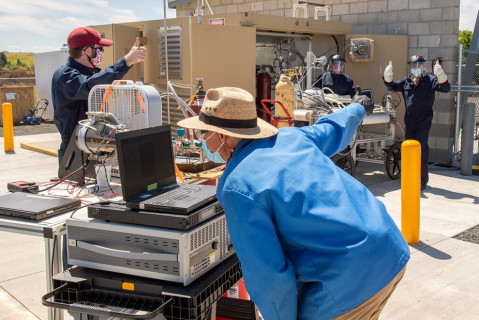 A Washington State University research team for the first time has successfully demonstrated the use of liquid hydrogen and a unique refueling system for powering Unmanned Aerial Vehicles (UAVs).

The test demonstrated a key technology needed for long endurance, all-electric flights for medium-sized UAVs. It could also be the first step toward a future of using hydrogen in aviation.

“This was a major milestone,” said Ian Richardson, a postdoctoral researcher on the project in the School of Mechanical and Materials Engineering. “Everything worked flawlessly in this test and functioned as designed on the ground.”

The aviation industry currently produces about 3% of global carbon dioxide emissions, but many solutions to reducing carbon emissions that are viable on the ground, such as electric cars from batteries or solar energy, are much more difficult in aviation. Hydrogen is increasingly being considered as a possible low-carbon solution for flying.

“Using hydrogen fuel for aviation is a hot topic,” said Jake Leachman, associate professor in the School of Mechanical and Materials Engineering who is leading the WSU project. “Folks are warming up to the idea, and we have gotten a few years head start. A UAV is a great testing ground.”

The WSU team has long been working to power flight with hydrogen. In addition to Richardson and Leachman, the team includes postdoctoral researcher Patrick Adam. Adam and Richardson were part of a student team that first began working on the idea of a hydrogen-powered plane almost a decade ago.

“Many companies have attempted liquid hydrogen flights with a marginal record,” said Leachman, who started the student effort. “It says something about Patrick and Ian that this work has continued and is succeeding.”

The test, conducted on the WSU Pullman campus, brought together several technologies that the team has been working on for a decade.

The WSU team over the last decade developed a unique liquid hydrogen storage tank that will eventually be used onboard to power flights. Liquid hydrogen occupies a lot less space than hydrogen gas, providing more fuel and allowing longer flights. The tank is made of a lightweight polymer instead of metal. WSU is one of the few places in the country where polymer materials can be tested at the very low temperatures required for liquid hydrogen storage. The tank also saves weight by having a heat exchange system within its tank wall to warm the hydrogen vapor. The hydrogen gas is then used to power a fuel cell that creates electricity to power the UAV.

The project also made use of a WSU-developed portable hydrogen gas station that uses water and electricity to create liquid hydrogen. Advances in cryogenic refrigeration technology and electrolysis have recently made it possible to create a compact hydrogen refueling system. The liquefier and refueling station are contained entirely within a 15-foot shipping container.

While the science of liquefying hydrogen is well understood, the research challenge was to create a safe and portable system that can dispense small amounts of liquid hydrogen. Many of the procedures for such a gas station don’t exist.

“You can’t go buy a jug of liquid hydrogen,” said Richardson. “We have to make it ourselves.”

The researchers hope to begin testing the liquid hydrogen power on real flights later this year.

The work was funded by the U.S. Army and the Washington Research Foundation. Partners on the project include Mississippi State University, and Insitu Inc. Insitu, a subsidiary of Boeing, is providing their ScanEagle3 UAV for the testing.