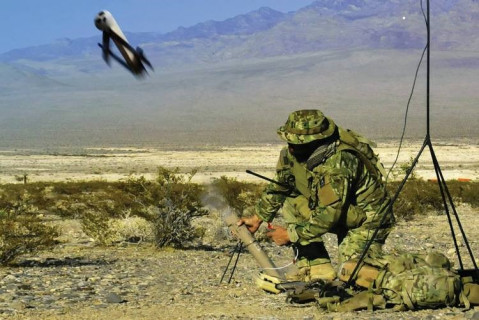 The U.S. Special Operations Command (USSOCOM) has just awarded an $18 million contract to Insitu, a subsidiary of Boeing, as part of the MEUAS III unmanned aerial vehicle (UAV) program.

Insitu manufactures the ScanEagle UAV for the U.S. military. The ScanEagle is an ISR-capable drone that can operate at high altitudes (its maximum operational ceiling is 19,000ft) and has a very high endurance (over 24 hours). It carries an assortment of sensory and surveillance equipment. The drone has a 10-foot wingspan and can be also launched and retrieved from U.S. Navy (USN) ships — it doesn’t require a runway to land but uses instead a hook-and-line recovery system, similar to the ones Navy jets use to land on aircraft carriers. Furthermore, it can be deployed from small, special operations capable craft, such as the Mark V Special Operations Craft, which is operated by the Special Boat Teams (SBT) — the guys that insert and exfiltrate SEALs from their objectives — of the Naval Special Warfare Command (NSWC).

The MEUAS III is a $1,5 billion contract that aims to provide SOCOM, among others, with a mid-endurance UAV capable of intelligence, surveillance, target acquisition, and reconnaissance (ISTAR) operations. The contract that was awarded to Insitu is a modification of a current contract and that intends to prevent any operational gaps until the latest version of the MEUAS III program becomes fully operational.

This is the latest development for the long-term program. A few months ago, SOCOM had selected UTC Aerospace Systems, a subsidiary of United Technologies, as the leading company for some MEUAS III project-related products. More specifically, UTC was contracted to provide SOCOM with TASE400 long-range spotters (LRS), TASE400 DXR imaging systems, and the Piccolo flight management system.

By utilising energy sensor wavelengths, the TASE400 systems (both the LRS and DXR) are capable of collecting full-motion video footage. Additionally, the Piccolo flight management system can provide SOCOM UAVs with an accurate and reliable navigation system, it has an organic GPS and inertial navigation system (INS).

Another UAV that falls under the MEUAS III program is the Aerosonde, which is built by Textron Systems. The Aerosonde is a compact UAV capable of collecting weather data, such as temperatures, humidity levels, atmospheric pressure, and wind direction and speed.

The initial iteration of the ScanEagle MEUAS program became operational in 2004, in an attempt to manage the situation in Iraq following the ousting of Saddam Hussein. The program’s different versions are being used across the Department of Defence (DoD) and the intelligence community.