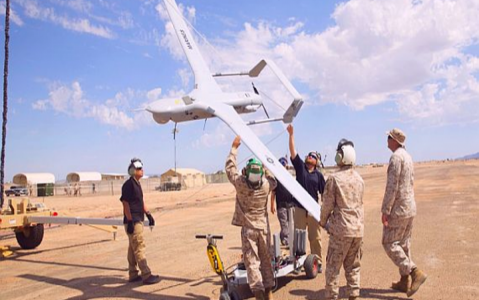 The two companies will receive $150,000 up-front, and compete for mid-endurance UAV services orders during four 1-year ordering periods, followed by one 6-month ordering period. The contracts collectively are worth $475 million.

The Textron catapult-launched RQ-7B Shadow tactical UAV is designed to provide reconnaissance, surveillance, targeting, and assessment. It can see targets from as far away as 78 miles from the tactical operations center, and recognize tactical vehicles from altitudes as high as 8,000 feet above the ground at more than two miles slant range, day or night.

The Shadow can deploy using three C-130 Hercules aircraft four-engine turboprop cargo aircraft. Short-duration operations require only one C-130, Textron officials say. Operators launch the UAV from a trailer-mounted pneumatic catapult, and recover it with arresting gear similar to those that stop jets on aircraft carriers during emergencies.

The Shadow has a gimbal-mounted, digitally stabilized, liquid nitrogen-cooled infrared camera that relays video in real time via a C-band line-of-sight data link to the UAV's ground control station.

The UAV is 11 feet long, has a 14-foot wingspan, weighs 375 pounds with payloads and fuel, flies as fast as 110 knots at altitudes as high as 15,000 feet, and can remain aloft for more than six hours.

The Textron Aerosonde small UAV is designed for expeditionary land- and sea-based operations and equipped for simultaneous day-and-night full-motion video, communications relay, and intelligence in one flight.

The Aerosonde has an 11.9-foot wingspan, can carry a 20-pound sensor payload, and can fly for as long as 14 hours with a range of 75 nautical miles.

The Boeing Insitu RQ-21 Blackjack is a twin-boom, single-engine, monoplane UAV for surveillance and reconnaissance. Users can launch and recover the reconnaissance drone on land or at sea without runways by using a pneumatic launcher and net-type recovery system.

The 81-pound Blackjack is eight feet long with a 16-foot wingspan, and is designed to carry multi-sensor payloads in a large pod below its nose. The UAV can fly as quickly as 104 miles per hour, cruises at 63 miles per hour, can fly as long as 24 hours, and can fly as high as 19,500 feet. It is a version of the Insitu Integrator UAV.

The Boeing Insitu ScanEagle UAV is 5.1 feet long with a 5.6-foot wingspan. It weighs as much as 48.5 pounds and can carry a 7.5-pound sensor payload. The UAV can fly for more than 24 hours at altitudes as high as 19.500 feet, and at speeds to 80 knots. The unmanned aircraft can fly on gasoline or heavy fuels.

The mission of ScanEagle is to provide persistent surveillance and reconnaissance imagery on land or at sea at lower costs than other surveillance methods for military and agriculture missions.

ScanEagle can carry a sensor payload consisting of visible-light camera, medium-wave infrared imager, or both integrated in one turret. The UAV ans has an analog digitally encrypted video data link, as well as encrypted or unencrypted command-and-control data link.

The ScanEagle UAV can be launched autonomously and uses a no-nets recovery system that recovers with its wing tip on a rope that hangs from a boom.