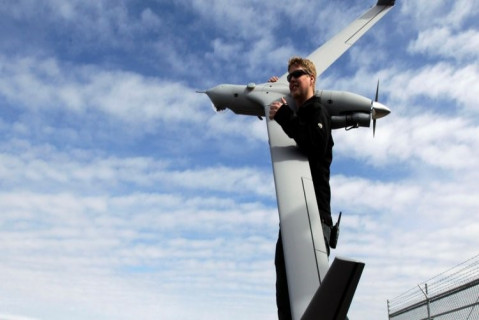 All Coast Guard National Security Cutters should have ScanEagle drones aboard and available for launch to boost high seas surveillance and aid in drug interdictions and arrests, according to Commandant Adm. Karl Schultz.

Commanders who have used the ScanEagle Unmanned Aerial System, or UAS, have told him, " 'I don't ever want to sail without ScanEagle again,' " Schultz said Dec. 7 at the National Press Club. "I'd like to see every national security cutter have one on the back."

Technicians prepare the ScanEagle unmanned aerial vehicle prior to take off from the flight deck of the U.S. Coast Guard cutter Stratton somewhere in the eastern Pacific Ocean. AP Photo/Dario Lopez-Mills

For the past 17 years, the Coast Guard Research and Development Center has experimented with various types of UAS, including a helicopter drone and MQ-1 Predator, for cutters but found them unsuited for the Coast Guard's dual mission of national security and law enforcement.

Last year, the Coast Guard tested a ScanEagle aboard the cutter Stratton on a six-week deployment to the Eastern Pacific. By the end of the deployment, the drone had flown 39 sorties for a total of 279 hours and assisted the crew in seizing 1,676 kilograms of contraband, valued at $55 million. It also aided in the arrests of 10 alleged drug traffickers, according to the service.

The ScanEagle, made by Insitu, a Boeing subsidiary, was developed from a commercial version designed to collect weather data and scan the ocean for schools of fish. The Coast Guard version is about 8 feet long, with a wingspan of 16 feet. The drone is sent aloft by a pneumatic launcher and recovered using a hook and arresting wire.

In June, Insitu announced the signing of a $117 million contract with the Coast Guard for the installation of ScanEagles aboard cutters. In a statement, Don Williamson, vice president and general manager of Insitu Defense, said when ScanEagle initially deployed with the Stratton, "We recognized what an incredible opportunity we had to partner with the U.S. Coast Guard to bring dynamic improvements to mission effectiveness and change aviation history."

The contract was "an incredibly important first step in realizing the Coast Guard's vision of fleet-wide UAS implementation," said Cmdr. Daniel Broadhurst, who has served as unmanned aircraft systems division chief in the Coast Guard's Office of Aviation Forces.

The fate of the UAS plan and other Coast Guard projects largely will depend on the outcome of the upcoming budget battles in the new Congress, Schultz said Friday.