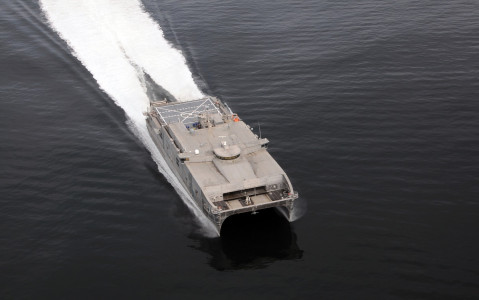 Spearhead sailed in the Atlantic Ocean off the coast of Key West, Fla., to conduct fleet experiments with multiple unmanned aerial and undersea systems.

Some of the experiments conducted included testing the Knifefish UUV enables mine countermeasures missions (MCM) from an EPF as a vessel of opportunity (VOO), operating the V-BAT and Scan Eagle to provide improved detection and monitoring to support counter-narcotics missions in the Caribbean and Eastern Pacific and testing PNT for navigation in GPS denied/degraded environments.

“In order for the fleet to focus on innovation as a priority, we have to be able to take time to experiment at sea. Having a U.S. Navy ship take a week out of operations to test new capabilities makes the final product of our experiments much better and more efficient.”

This experiment is in line with a global trend that consists of using manned surface vessels (sometimes fully-fledged surface combatants) for the launch, operation and recovery of unmanned maritime systems, essentially using the manned vessel as a mother ship. As Naval News has reported, the navies of Singapore (MRCV) and Japan (30FFM) are working on such projects. So are the navies of Belgium and the Netherlands in the field of mine warfare. As we reported earlier this month, the Russian Navy recently experimented the same concept from one of its Project 22350 frigate.

Designed and built by Austal USA, Spearhead is 103 meters (338 ft) long and 28.5 meters (94 ft) in beam. She has space for 41 crew members and accommodations for up to 150 people and an additional 312 seats for troop transport.

The EPF’s large, open-mission deck and large habitability spaces provide the opportunity to conduct a wide range of missions from engagement and humanitarian assistance to disaster relief, and from maritime security support operations, to intelligence, surveillance, and reconnaissance. The Expeditionary Fast Transport ships are performing valuable missions all over the world.

With a draft of only 13 feet and a unique propulsion system, its ability to access austere and degraded ports with minimal external assistance provides an overabundance of options to fleet and combatant commanders. Along with its draft, propulsion system, enormous mission bay and greater-than 40 knot speed, these ships have the potential to support future requirements in special operations, command and control, and medical support operations.

It has to be noted that Austal USA is now proposing a medium-size unmanned surface vehicle (USV) based on the EPF design. The U.S. Navy recently issued an RFP for this type of USV. Full article: