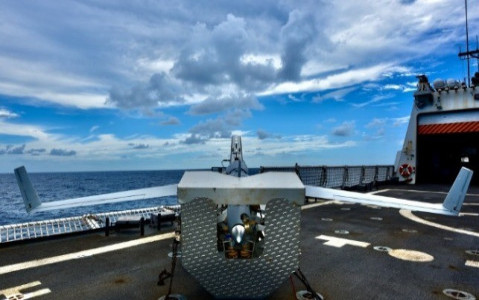 The lights are low. Green and blue pixels illuminate the faces of watchstanders in the Combat Information Center (CIC) aboard the U.S. Coast Guard cutter Stratton. The six consoles sit in two rows of three with the watch facing the bow of the ship.

This windowless room is chilled to preserve the servers and other electronic equipment, extending the ship’s sensors and allowing them to see contacts many miles away. Everyone in the room wears a sweatshirt or coat and beanie to ward off the cold. No personal electronics are allowed inside.

The CIC watch is made up of operations (OS) and intelligence specialists (IS). The ISs monitor secure traffic and intelligence products over classified networks in the nearby Secure Compartment and Information Facility (SCIF). The OSs are a party to some of these products, and they also manage message traffic, contact monitoring, aviation (air) operations, electronic warfare, weather and more.

For the past five months, these 16 members - some permanent party and others temporarily assigned - have stood an aggressive Condition Three watch schedule, 12 to 16 hours per day, to meet Navy standards and mission. Stratton is traveling the South Pacific and the Far East on missions for the U.S. Navy’s 7th Fleet and the U.S. Coast Guard, and she has covered over 27,000 miles so far. At any moment during the first four months, one-third of the OS team is on watch with five to eight people on duty. Many others are working on other required shipboard watch qualifications. They also participate in navigation and helicopter operations and serve on damage control teams.

“Two-thirds of our staff, including us, the CIC supervisors, are new this patrol,” said Senior Chief Petty Officer Seth Roedl, CIC supervisor. “It’s critical for this watch to come together and work as a team. Some of these folks have been at command centers, other cutters, or right from 'A' school. They’ve stepped up. I have [3rd class petty officers] qualified well and standing watch supervisor, usually an E-5 or E-6 position.”

CIC is the nerve center of a military ship, and Stratton's crew have practiced for military engagements. In recent simulations on Stratton, a watchstander relays a report of an incoming missile attack to the watch supervisor who alerts the bridge. “Now all hands brace for shock. Missile inbound port side” echoes through the ship over the address system known as the 1MC. As CIC maintains the operational picture, the tactical action officer (TAO) takes steps to defend the ship, the helm and navigation watch take evasive action to avoid further missile strikes by maneuvering the boat, and damage control teams are dispatched throughout the vessel to investigate, make reports to the bridge, and mitigate any losses. The crew practices some or all of this routine almost daily.

“These last months were a challenge as we’ve adjusted to the Navy mission and integrated into the Department of Defense structure for joint surface warfare,” said Roedl. “Team Stratton provides useful data to our partners during these engagements and exercises, and we’re taking back experience to share with the Coast Guard fleet.”

From Operation Talisman Saber off Australia to Sama Sama in the Philippines and Cooperation Afloat Readiness And Training in the Far East, these coastguardsmen have worked diligently with counterparts from the U.S. Navy and partner nations. They’ve run countless joint drills simulating surface warfare and supporting other Department of Defense elements — such as the protection of U.S. Marines landing to the beaches of Australia in a simulated liberation assault.

“The U.S., through an effort by crews like Stratton, is strengthening long-standing military relationships and encouraging the development of a strong defense network with allies and partners,” said Capt. Bob Little, Stratton's commanding officer. “Oceania, also known as the Blue Pacific, is emerging as a center of gravity in the great power competition between the U.S. and its allies and others with a different vision. This combined team is what puts the 'national' in National Security Cutter.”

For weeks this team located, identified, and reported all contacts. All relayed back to the U.S. Navy Surface Action Group or shoreside controllers using various systems, including Centrix, a chat system operated at a secret level, or through daily operations summaries. Stratton picked up anywhere from one to three shadows during this time, primarily Chinese intelligence-gathering ships.

The National Security Cutters (NSCs) have an advantage over many other ships: the ScanEagle, a small but powerful aerial surveillance drone (sUAS). Armed with a daytime or nighttime camera, the aircraft remains airborne for hours relaying real-time information back to the ship.

Launching the sUAS requires the contracted team from Scan Eagle to set up a launcher roughly the size of a large all-terrain vehicle aimed at the sky. The drone is put in place on the track, and the Stratton’s flight quarter’s team prepares the deck and staffs the helicopter control officer station above the flight deck, communicating with the deck crew and with the bridge. The ship turns into the wind, and once approved, the drone slingshots into the sky in seconds. Recovery is a bit like snaring a rabbit as it passes by the trap on a deliberate course.

In the corner of CIC, an sUAS operator pilots the drone. During the launch, they ran checklists and evaluated the drone’s systems. The camera is now active and scanning for contacts. The OS on the air console in CIC also monitors the video feed. When tracking a contact they take screenshots and clips of the imagery to include in reports and share with partners for maritime domain awareness and information sharing. These aggregate reports build the picture of activity in the region and help to identify who, when, and how often they are present.

On this particular day, they are tracking a 394-foot ship resembling a transhipper. These vessels receive fish catch from smaller fishing vessels and resupply them, allowing the small vessels to remain at sea longer.

Tuna is a $7 billion-per-year industry, and about 70 percent of all tuna is from the Western and Central Pacific. Estimates place the value of illegal, unregulated and unlicensed fishing (IUU fishing) as high as $616 million annually. Illegal fishing operations are robbing Blue Pacific countries and the global commons in plain sight. It's the regional people who suffer.

“Transshipment is a key factor in the success of IUU activity,” said Capt. Little. “While some transshipment is lawful, there is significant illegal transshipment and major underreporting of their catch against quota limits. Enforcement is very challenging due to the vast distances in the Pacific and the lay-down of enforcement assets. Our partnerships are essential, and technology like ScanEagle allows us to identify and track contacts much farther out or locate those 'dark targets' - vessels not on radar or transmitting on Vessel Management System (VMS).”

As the 55-pound, five-foot-long drone flies 3-5,000 feet over the Korean-flagged vessel Mononok, the operators and CIC watch observe rows of barrels on deck, possibly containing fuel and oil. Hatches are rolled back revealing significant insulation. This information, coupled with visuals of crewmembers bundled up despite the 86-degree ambient heat and humidity, reaffirm this vessel’s role as a refrigerated cargo and supply ship. Ironically, the ScanEagle system was initially developed as a tool for the tuna fleet to locate schools of fish. It is used from the battlefields in the Middle East to (now) the Pacific Ocean.

“The capability is a force multiplier. As civilians on the ship we have a personal responsibility for integrating with the crew,” said Mike McCord, also known as ScanEagle Mike. McCord has been with Stratton for six patrols covering more than half the globe, dating back to 2016.

“As site-lead on the ship, my role is to find the best way for our team to augment the crew and execute the captain’s intent. We are fully integrated — I can’t do what we are here to do without help from the various departments from electronics support to fuel for the drone. It means being a part of the crew," McCord says. "We fly, but we also help out with daily tasks. I’ve deployed in support of every other armed service, and the Coast Guard has made this the place I want to be. We use so few resources to get so much done, from the technology to the diversity of the people. It’s an honor.”

The Stratton transited from the Philippines to Guam in October, conducting seven successful high seas fisheries boardings under the authority of the Western and Central Pacific Fisheries Commission (WCPFC). Stratton personnel boarded vessels flagged from Chinese Taipei and China, inspecting documentation, catch logs and fish holds and interviewing the master and crew. The most common violation discovered involved failure to transmit a signal on VMS, which is designed to help provide visibility of fishing activity in the region. ScanEagle was used in support of these boardings to identify targets, do initial inspections, and keep a watchful eye on the teams.

In the EEZs of other nations with whom the U.S. has bilateral agreements, the Coast Guard won’t conduct boardings without a shiprider from that county aboard to exercise their sovereign authority. However, ScanEagle can be flown and provide visual proof and maritime domain awareness of vessels operating in the region and their activities.

“This technologically-heavy approach is the new normal . . . but it doesn't function without our incredible people," said Capt. Little. “And we are using it alongside our partners to advance a vision of a free and open Indo-Pacific. The consistent presence of Stratton and [USCG cutter] Bertholf before us, along with Coast Guard assets based in Guam and Hawaii, demonstrate our commitment in the region to enrich and maintain alliances and partnerships while sharing a respect for sovereignty, fair and reciprocal trade, and the rule of law.”

Stratton is the third commissioned National Security Cutter and is homeported in Alameda, California. The 150-member crew has been operating in the Indo-Pacific since June conducting joint missions under the command of U.S. 7th Fleet. Their patrol will conclude in mid-November.

This article appears courtesy of U.S. Coast Guard News and may be found in its original form here.

The opinions expressed herein are the author's and not necessarily those of The Maritime Executive.