With 11 tons of seized drugs, US Coast Guard asks for more ScanEagle drones 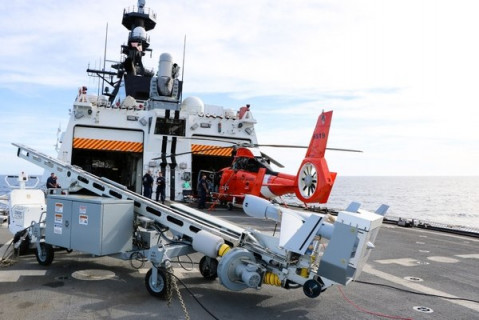 WASHINGTON ― What can fly for 12 hours straight, launches from a catapult on the deck of a Coast Guard cutter and has helped apprehend more than 11 tons of contraband?

Answer: small unmanned aircraft systems, and the U.S. Coast Guard has asked for a lot more of them.

The Coast Guard began the hunt for an economically priced and multipurpose drone earlier this year after recording its third-largest drug bust of all time with the help of sUAS.

Faced with the challenge of policing millions of nautical miles of sea for cocaine smugglers, the Coast Guard specified the need for an sUAS able to “conduct surveillance, detection, classification and identification operations.” The drone also needs to “support prosecution by providing real-time imagery, data, target illumination, [and] communications relay” to Coast Guard vessels.

Now, the Coast Guard seems convinced it has found the answer in the form of Insitu’s ScanEagle.

Cmdr. Daniel Broadhurst, unmanned aircraft systems division chief in the Office of Aviation Forces, praised the “transformational technology” of the sUAS as “an incredibly important first step in realizing the Coast Guard’s vision of fleetwide” drones. He also said in a statement that the Coast Guard is “excited” to contract with Insitu.

Though the U.S. Navy has experience operating the ScanEagle aboard its vessels, Insitu is presented with an entirely new challenge when it comes to the Coast Guard, according to Ron Tremain, Insitu’s business development executive for the U.S. Coast Guard.

“The USCG isn’t like other militaries ― they routinely operate in extreme atmospherics that other services don’t typically operate in” Tremain explained. Moisture proved to be the biggest challenge, as the engineering team had to weatherize the ScanEagle (originally built in 1994 to collect weather data) to operate in rain, squalls and heavy sea states.

The Coast Guard has good reason to be excited about the potential of the ScanEagle and the improvement of drone capabilities. The “sUAS capability was involved in 17 drug interdictions resulting in the confiscation of 10,202 kilograms of contraband,” according to a Coast Guard statement. That’s roughly 11 tons.

“This contract is only the beginning for unmanned systems within the Coast Guard,” Jeff Bishop, program manager with the Office of Aviation Acquisition, said. “And to be at the very beginning of this paradigm shift is an amazing experience.”